The reign of the Micro Knights!

As the sun rises above the distant towers of Chatoux Prix, dragon king Chalcedony orders all knights to take charge outside the kingdom walls. According to the king, in order to keep the kingdom safe, all potential threats, big or small, must be eliminated. The task falls on the three valiant knights Sir Smash, Sir Charge, and Sir Count. The excitement rises as our heroes exit the castle gate and embark on their quest to restore order in the kingdom.

Micro Knights is an action-packed slot in the ELK Friends Series. This intense game offers a lot for the player to discover. Symbols drop down onto the 7×7 symbol grid, where clusters of 5-or-more symbols generate a win. Providing an additional dimension to the game is the symbol queue. It collects a reserve of symbols ready to be matched with symbols on the grid to form new winning clusters. It is also able to boost existing clusters generating even higher wins!

Every symbol drop is exciting and all wins, big or small, contribute and increase the chance to trigger one flag feature after another.

Time to bring order to the kingdom!

The Charging Knight sticks around on the left side and is always ready to come to the rescue. He randomly charges the symbol grid at the end of an avalanche flow and pushes everything that comes in his way down into the queue. Symbols in the queue are used to create new winning clusters and to boost existing clusters on the symbol grid. A queue with big symbol groups brings a lot of action and its hypnotic to see how winning clusters explode, refills the grid and how the queue works in your favor to generate wins after wins. Bonus symbols and wilds are too heavy for the Charging Knight to push so they are kept on the symbol grid.

The Smashing Knight oversees the symbol grid in the upper left corner and randomly smashes his mace so that the entire game view shakes and all the symbol groups in the queue increase by one.

The Counting Knight is the calmest of the three knights. Analytical as he is, he keeps track of the size of the winning clusters and hands out life-saving features through his six different flags. All winnings are counted regardless of size, but the bigger the cluster win, the more is added to the meter. 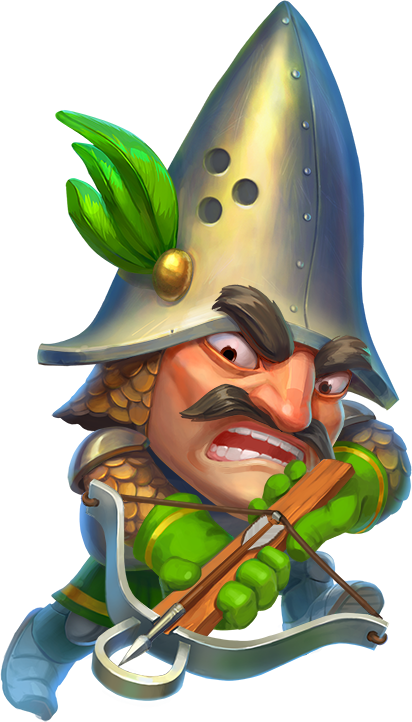 Flag features
Winning clusters fill up the meter, which awards a flag feature once it is filled. The bigger the cluster, the more the meter fills up. Awarded flag features come into play when the avalanche flow has come to an end. All flag features are likely to initiate a new avalanche flow and potentially additional wins. Some of the features even bring a guaranteed win.

Inferno
All low-value symbols are removed from the symbol grid, which initiates a new avalanche flow and potentially additional wins.

Super Size
Suddenly a big symbol of size 2×2, 3×3 or even 4×4 appear from the sky and lands on the symbol grid generating a guaranteed cluster win. A new avalanche flow is initiated by the cluster win.

Charge
2-5 rows of symbols are pushed down to the queue, which initiates a new avalanche flow with a bigger queue potentially generating significant wins.

Epic Charge
A guaranteed retrigger of the avalanche flow, since the whole symbol grid is emptied and added to the queue. Thereafter, additional symbols drop in and the avalanche flow starts off using the big queue.

Boosted Queue
With this flag feature, the order of the queue doesn’t matter, everything can be used simultaneously generating numerous cluster wins on the symbol grid. A new avalanche flow is initiated after the cluster wins.

Fun Fact
From fairytales to Hollywood blockbusters, “the rule of three” (or “omne trium perfectum” for you that prefers Latin) suggests things that come in threes are always more humorous, satisfying and effective than any other number of things.

For the optimal gaming experience, ELK Studios recommend launching the game in 1600×900 resolution. If scaling is required, use 16:9 ratio.